The Tale of Bluebeard

November 15, 2018
Once upon a time...in the fair land of France, there lived a very powerful lord, the owner of estates, farms and a great splendid castle, and his name was Bluebeard.
Bluebeard often went away to war, and when he did, he left his wife in charge of the castle... He had had lots of wives, all young, pretty and noble. As bad luck would have it, one after the other, they had all died, and so the noble lord was forever getting married again.
"Sire," someone would ask now and again, "what did your wives die of?""Hah, my friend," Bluebeard would reply, "one died of smallpox, one of a hidden sickness, another of a high fever, another of a terrible infection... Ah, I'm very unlucky, and they're unlucky too!
They're all buried in the castle chapel," he added. Nobody found anything strange about that.
-Taken from Bluebeard by Brothers Grimm

Come check out this and other amazing artist renditions of The Brothers Grimm stories at the art gallery at The Enchantment Event!  This art was made using tons of items from We Love Role-Play however.  Bluebeard tends to be too gruesome of a story to be popular.  :) On Me:
Skin: Morgana 03 on Lelutka Simone by Glam Affair *New*
Hair: Miaa by Iconic @ The Liaison Collaborative *New*
"Varhendis" Gown by Senzafine @ We <3 Role-Play *New*
Collyrium Tears by Cureless
Pose with Lantern: My Winter Lantern Pose 2 by Kirin 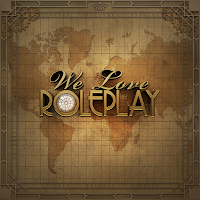